Is Norway able to open the Kinder Egg of mobile offshore wind? 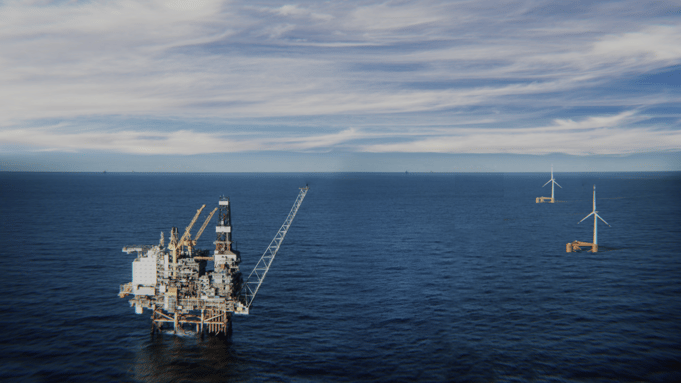 These three aspects are in our opinion a Kinder Egg being served on a silver platter, but the question is whether we can open it on time. The below article discusses the urgency to act now in order to achieve the 2030 targets:

A country blessed with natural resources

Norway is blessed with many natural resources. Fish provided livelihoods and created the first export adventures. Hydro power the cleanest and cheapest power supply in the world, creating a foundation for power intensive industries. The oil and gas resources provided an enormous fortune, while creating a globally competitive industry and competent labour force. In addition, the world`s best offshore wind resources have a potential to form the basis for developing new industry and export revenues. However, this opportunity will not be realised automatically.

There is a broad political consensus in Norway to continue oil and gas production. Norwegian gas is a necessary resource during the energy transition as an alternative to coal, until renewables eventually can substitute gas. The Norwegian Continental Shelf must target to supply Europe with gas produced with a low carbon footprint in the energy transition. The Norwegian Government’s emission reduction targets reflect this, aiming for at least 50% by 2030.

Increased power demand is not matched by sufficient supply

Today`s plans and toolbox for de-carbonising the oil and gas industry are fixed around power from shore. The aggregated energy demand is large and many of the shore power projects are considered both technically- and commercially challenging. Further, Statnett (system operator of the Norwegian power system) receive a record number of inquiries from land-based industries like hydrogen and battery factories. These projects could gradually replace jobs within oil and gas, but may be delayed in doing so due to lack of capacity in the onshore grid. Interconnector cables to Europe are necessary to exploit renewable power, but the demand for power increases faster than the supply side, causing imbalances and increasing power prices with negative impacts on consumers and onshore industries.

We don’t see too many plans to supply more power into the grid, and there is an uncertainty on how future demand shall be met. There is moratorium for onshore wind power in Norway. Although hydropower facilities are being upgraded, there are no new material developments with supply impact being planned. Offshore wind farms like Utsira North and Southern North Sea will most likely not be in production before 2030 due to time consuming concession processes. Nuclear power is not considered an option due to the controversies associated with the technology.

In the introduction we described three crucial conditions making up a kind of Kinder Egg. There is a solution which would allow us to achieve all three, electrifying oil and gas fields without shore power, contributing to emission reductions from 2024 while kick-starting an export industry based on offshore floating wind.

We refer to link below for more information on our Mobile Offshore Wind Units:

Why a MOWU is such a great idea

The Offshore Energy Act has an exemption from the concession regime which is the main rule for offshore wind farms. The Petroleum Act opens for approval of power production offshore to support petroleum installations. Consequently, the mobile offshore wind units may be deployed already from 2024. Further, they can be moved to new locations when the oil and gas fields are phased out to ensure long term usage and circular economy philosophy with limited impact on the environment. Many believe offshore wind is not yet commercially viable, but this no longer hold any merit. We have written more about this in the following article:

Power costs for a platform that is not connected to power from shore, is around 200 EUR/MWh. The step-up in CO₂ taxes will drive this upwards to around 300 EUR/MWh within 2030. The willingness to pay for power in oil and gas is significantly higher than land based industry, and even more if the power source leads to emission reductions.

This creates a unique opportunity for Norway. Even though floating wind is expected to provide competitive power prices in the long term, it will take time for the solution to get to this stage. Other countries like Great Britain, France and South Korea are deploying massive subsidies to kick-start this industrial development, which generally entails high local content and job creation.

What we need from regulatory authorities

Given that the technology and capabilities are ready for deployment of offshore wind to de-carbonise oil and gas installations, what is needed to support this?

The first projects will require some support for risk reduction purposes. ENOVA (Norwegian government enterprise mandated to promote environmentally friendly production and consumption of energy) is the vehicle set up for this in Norway. Learnings and economies of scale are expected to give cost reductions that can rapidly enable profitable projects without funding support. The NOx fund has proven to be an efficient tool for the industry to reduce NOx emissions, and can easily be expanded to include CO2. Providing risk capital until the market is established is another de-bottlenecking exercise the authorities can contribute with to enable technology qualification. We have elaborated more on the measures that could be taken in this article:

What is required to accelerate de-carbonisation of the oil and gas industry?

Norwegian authorities have a tradition to leave technology choices to the operators on the Norwegian Continental Shelf, which historically has been a success story. However, during the planning of the Johan Sverdrup field, a foresighted Parliament demanded a power from shore solution. This resulted in oil production with record low CO2-intensity. It also led to a regulation making it mandatory to assess power from shore for new field developments.

Even though power from shore may be a good solution in some cases, maybe the time is right for the Norwegian Parliament to challenge the industry once more, making it mandatory for operators of existing fields without shore power to assess directly connected floating wind power as a de-carbonisation tool? The solution is already here – are we able to open the Kinder Egg in time?

Per Lund is the CEO of Odfjell Oceanwind where he leads a team that will accelerate the energy transition by the use of Mobile Offshore Wind Units. Before his current role he was the CTO and EVP for technology and sustainability in Odfjell Drilling. He holds a MSc in marine engineering from Norwegian University of Science and Technology in Trondheim and has a wide background from the energy industry.